Steve Balmer, Microsoft CEO, has been quoted saying Project Natal would be the Most exciting and potentially groundbreaking product Microsoft would deliver this year.

A specific comment from Balmer did resonate for me:

Because the technology actually is very general purpose, and we’ll see come into the rest of our lives pretty soon.  It’s a little camera and microphone that sits on top of your TV set. And if you want to control the TV, you don’t go get some remote control or big fat gaming thing...

Now, if you’re like me and have been following recent development of natural user interfaces, you’re quite optimistic about the future of those new technologies.  For instance, watch how Johnny Lee was about to hack a wii remote control (basically, using its infra-red sensor) to create a Low-Cost Multi-touch Whiteboard and a Head Tracking for Desktop Virtual Reality Displays.  Those are inexpensive gadgets opening up an whole new set of scenarios.

Multi-touch has been massively popularized by the iPhone.  But multi-touch has its limitations.  For instance, have a look at a demo of Microsoft Courier, an upcoming booklet PC from Microsoft.  Now this is an early demo, but as groovy as it looks, I can’t help but to think it showcases the limits of touching a screen to communicate intention to a machine.  Scrolling is natural, writing is to.  But what about closing the current window, coming back to the main menu, etc.  ?  Is it going to be weird gesture you have to learn?  Maybe I’m worrying too much and maybe Windows gesture weren’t so obvious when they were introduced either, but I also think that we need more than multi-touch.  For starter, I don’t want my screen to become a finger juice sponge ;) 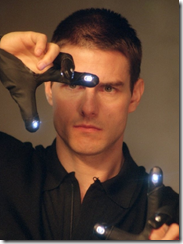 I don’t know if project Natal itself is going to be the X-Mas hit Steve Balmer would like it to be, but for me it’s a definite step in the direction of more natural user interfaces.  It’s a bold move:  it’s not introducing a new pen, mouse or remote control, it’s using your body as the interface!

So Minority Report – type user interfaces might not be so far after all!