How to improve Azure: Can you keep a secret?

In this blog series I explore some of the shortcomings of the Windows Azure platform (as of this date, March 2014) and discuss ways it could be improved. This isn’t a rant against the platform: I’ve been using and promoting the platform for more than four (4) years now and I’m very passionate about it. Here I am pointing at problems and suggesting solutions. Feel free to jump in the discussion in the comments section!

What is a secret in the context of a Cloud Application?

A typical Cloud application interacting with a few services accumulates a few of those. As an example:

All those secrets are used as input to some Azure SDK libraries during the runtime of the application. For instance, in order to create a MessagingFactory for the Azure Service Bus, you’ll need to call a CreateAsync method with the credentials of the account you wish to use.

This means your application requires to know about the credentials: a weakness right there!

Compare this with a typical way you configure an application on Windows Server. For instance, you want an IIS process to run under a given Service account? You asked your favorite sys-admin to punch in the Service Account name & password into the IIS console at configuration time (i.e. not at runtime). The process will then run under that account and never the app will need to know the password.

This might look like a convenience but it’s actually a big deal. If your app is compromised in the Windows Server scenario, there is no way it can reveal the user credentials. In the case of your Azure app, well, it could reveal it. Once a malicious party has access to account credentials, it gives it more freedom to attack you than just having access to an app running under that account.

But it doesn’t stop there…

Where do you store your secret on your Azure app? %99 of the time, in the web.config. That makes it especially easy for a malicious party to access your secrets.

Remember, an application deployed in Azure is accessible by anyone. The only thing protecting it is authentication. If you take an application living in your firewall and port it to the cloud, you just made it much more accessible (which is often an advantage because partners or even your employees, from an hotel room, have access to it without going through the hoops of VPN connections) but are also forced to store credentials in a less secure way!

On top of that, in terms of management, it’s a bit awkward because it mixes application parameters with secrets. Once a developer deploys or creates a deployment package to pass it to the sys-admin (or whoever plays that role, it might be a dev-ops developer, but typically, not everyone in the dev group will know about production credentials), it must specifies some arbitrary config keys the sys-admin must override.

So in summary, we have the following issues:

This one isn’t easy. Basically, my answer is: in the long run we could but cloud platforms haven’t reached a mature enough level to implement that today. But we can establish a roadmap and get there one day with intermediary steps easing the pain along the way.

Basically, the current situation is: 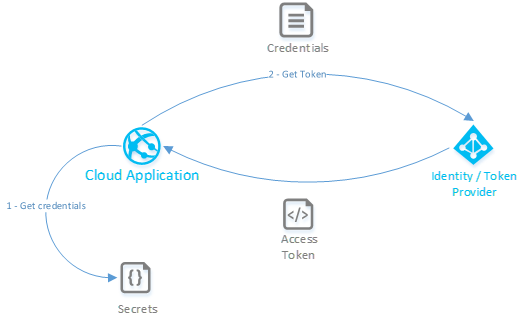 That is, the app gets credentials from an unsecure secret store (typically web.config) then request an access token from an identity / token provider. It then uses that token to access resource. The credentials aren’t used anymore.

So a nice target solution would be: 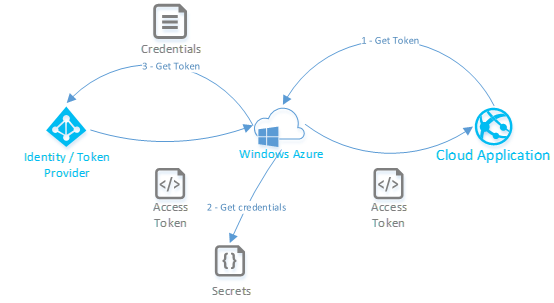 Nice. Now how would that really work?

Well, it would require a component in Azure, let’s call it the secret gateway, to have the following characteristics:

That sounds like a job for an API. Here the danger is to design a .NET specific solution. Remember that Azure isn’t only targeting .NET. It is able to host PHP, Ruby, Python, node.js, etc. . On the other hand, if we move it to something super accessible (e.g. Web Service), we’ll have the same problem to authenticate the calls (i.e. requirement #3) than how we started.

I do not aim at a final solution here so let’s just say that the API would need to be accessible by any runtime. It could be a local web service for instance. The ‘authentication’ could then be a simple network rule. This isn’t trivial in the case of a free Web Site where a single VM is shared (multi-tenant) between other customers. Well, I’m sure there’s a way!

The first requirement is relatively easy. It would require Azure to define a vault and only the secret gateway to have access to it. No rocket science here, just basic encryption, maybe a certificate deployed with your application without your knowledge…

The second requirement is where the maturity of the cloud platform becomes a curse. Whatever you’ll design today, e.g. oauth-2 authentication with SWT or JWT, is guaranteed to be obsolete within 2-3 years. The favorite token type seems to be changing every year (SAML, SWT, JWT, etc.), so is the authentication protocol (WS-Federation, OAuth, OAuth-2, XAuth, etc.).

Nevertheless it could be done. It might be full of legacy stuff after 2 years, but it can keep evolving.

I see the secret gateway being configured in two parts:

You could even have a trivial mechanism simply providing you with a secret. The secret gateway would then act as a vault…

We could actually build it today as a separate service if it wasn’t from the third requirement.

Do you think this solution would be able to fly? Do you think the problem is worth Microsoft putting resources behind it (for any solution)?

Hope you enjoyed the ride!