Azure Data Lake (both Storage & Analytics) has been in public preview for a month or two.

You can get started by reading this.

I thought I would kick some posts about more complex scenarios to display what’s possibile with that technology.

In this post I’ll write about how to register assemblies in Azure Data Lake Analytics (ADLA).

This one took me quite a while to figure out, no thanks to the beta state of the tooling.

Let’s start with the problem.  Let’s say we need to have some C# custom code and share it among multiple USQL scripts.

I’m talking about “complex code”, not inline C# code you insert within a USQL script.  The following is inline C#:

Here we simply call the string.Split method inline a select statement within a USQL script.  This is “complex code” called in USQL:

where, of course, MyNamespace.MyClass.MyMethod is defined somewhere.

Inline code works perfectly well and is well supported.  For complex code, you need to register assemblies and this is where the fun begins.

Now you’ll often need to go with complex code because inline code is a bit limited.  You can’t instantiate object and hold references to them in U-SQL right now.  So inline code really is that:  inline method call.

I’ll show you different approaches available and tell you about their shortcomings.

Keep in mind that this is based on the public preview and that I write those lines early January 2016.  Very likely, a lot if not all those shortcomings will disapear in future releases.

The easiest way to do complex code is to use the code-behind a script.

This should look familiar to you if you’ve done any Visual Studio with ASP.NET, WPF, Win Forms and other stacks.

In the code-behind you can author classes & methods and invoke those in the U-SQL script.

Now when you submit your script, Visual Studio performs some magic on your behalf.  To see that magic, let’s look at an example:

This is a tad ceremonious, but you need to have an output for a script to be valid and it’s easier to take an input than create one from scratch.  Anyhow, the important part is the invocation of the Hello method.  Now here’s the code behind:

Now if you submit that script as a job and look at the generated script, by clicking at the bottom left “Script link” in the job tab: 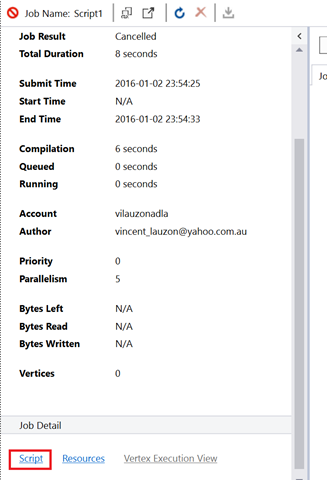 You’ll see the script submitted to the ADLA engine:

You see that a few lines were added.  Basically, the script is augmented to register an assembly and to drop it (delete it) at the end of the script.

The assembly is registered by emitting its byte-code inline in hexadecimal.  A bit crude, but it seems to work.

Now this works well but it as a few limitations:

So if this solution works for your requirements:  use it.  It is by far the simplest available.

This allows you to create code independant of scripts.  Right click on the project and select the last option on the menu. 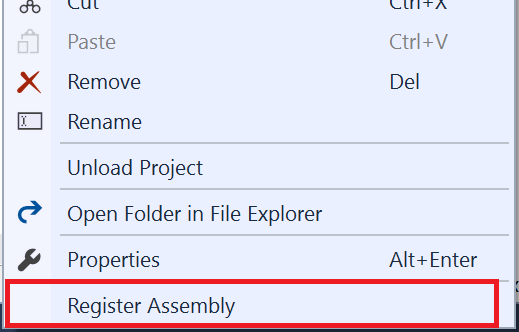 This will pop up a dialog with a few options. 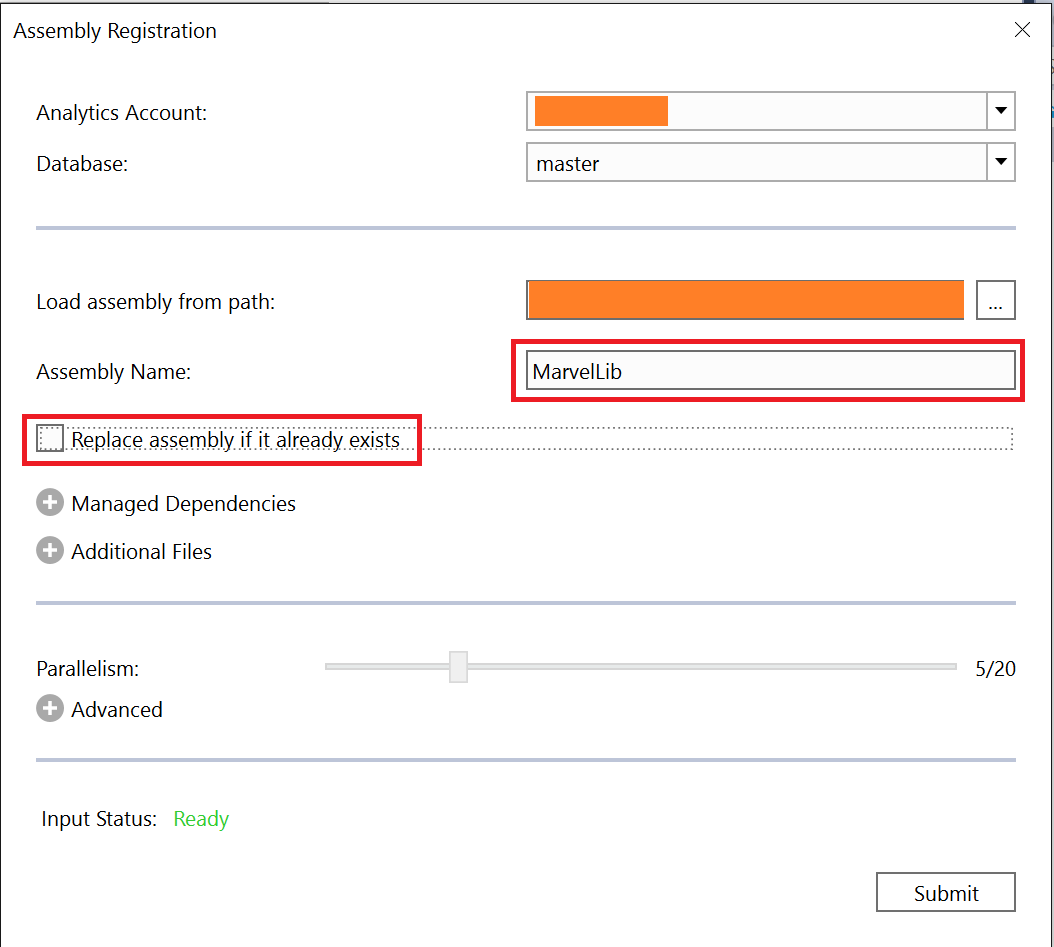 Now be careful and always click the “Replace assembly if it already exists” option, otherwise you can only create it once.

Select which ADLA account and which DB you want the assembly to be registered in and submit the job.

Again, if you look at the script submitted to ADLA, it looks like this:

So the assembly is registered independant of other scripts on your behalf.  This is done again by emitting the assembly’s byte-code inline.

The major inconvenience with this method is that you need to register it manually as oppose to just recompile.

Now, let’s go hard core.  We’ve seen how Visual Studio does it, why can’t we do the same?

Well, not exactly the same unless you want to input the byte-code in hexadecimal.

If you look at the documentation we can see there is another way to register an assembly:  by refering the dll in the Azure storage:

Now the major drawbacks of this approach are

I would say at the moment, with the current tooling, there is no perfect solution.  So I would recommend the solutions we explored in given contexts.

So those are my recommendations.  Let me know if you have any comments / questions!