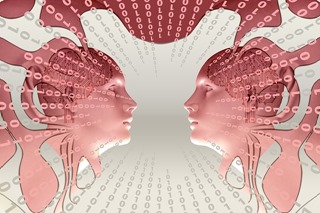 With this we are able to interact with the cluster & deploy containers.

There is a bit of “auto magic” happening in there.  In this article we will focus on that magic.  Specifically, we’ll focus on identity.

The first bit of magic is how do we connect to the cluster?  At no point have we logged in on the cluster.  When we interact with the cluster, we use kubectl.  That is a Kubernetes tool, not an Azure tool.  Can that tool use our Azure AD credentials?

The second bit of magic might not be obvious on first trial.  Let’s consider using Kubernetes for tasks such as:

Those tasks do create Azure resources:  they create Public IPs and Azure Disks.

A question we could ask is “who is creating those resources”?  Which Azure AD user is creating the Azure resources?  Is it our own personal account?  We’re the one behind the keyboard and we’re logged into Azure CLI.  But this isn’t Azure CLI, it’s the Kubernetes AKS Cluster, from within Azure.

A caveat from the get go, Azure RBAC integration is coming to AKS.  Juan Manuel Rey give a sneak peak of how it might look here.

Here are the three CLI lines to create and connect to an AKS Kubernetes Cluster:

The first line creates the cluster.  The second installs kubectl (Kubernetes client controller).  The third one configures kubectl to connect to the cluster.

Only step 1 & step 3 involves identity.  Step 2 litterally is only an install of kubectl tool.

Step #4 deals with the cluster only.  Step #5 creates objects on the cluster.  But it also integrates with Azure to create an Azure Disk and attaching it to a VM in the cluster.

So let’s look at the entire workflow focussing on the identity. 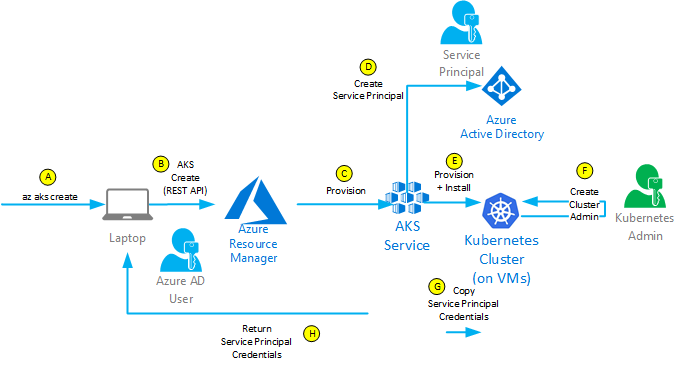 Let’s walk through the sub steps, focussing on how identities are handled:

Already, on the first step, on this innocuous CLI command, we see three identities:

An important point here.  The Azure AD user must have the right to create service principals.  If not, creation will fail.

To our knowledge, nothing happens at the identity level with that command.  It installs a version of kubectl CLI compatible with Azure. 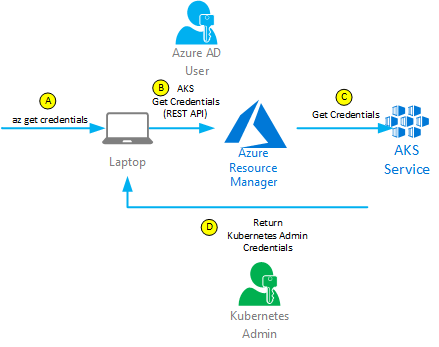 Here are the sub steps:

Subsequent command will then be able to simply lookup the ~/.kube/config file to authenticate against the cluster.  That YAML file accumulates information about different clusters and keeps track of the “current” one.  Here is an example with 2 clusters: 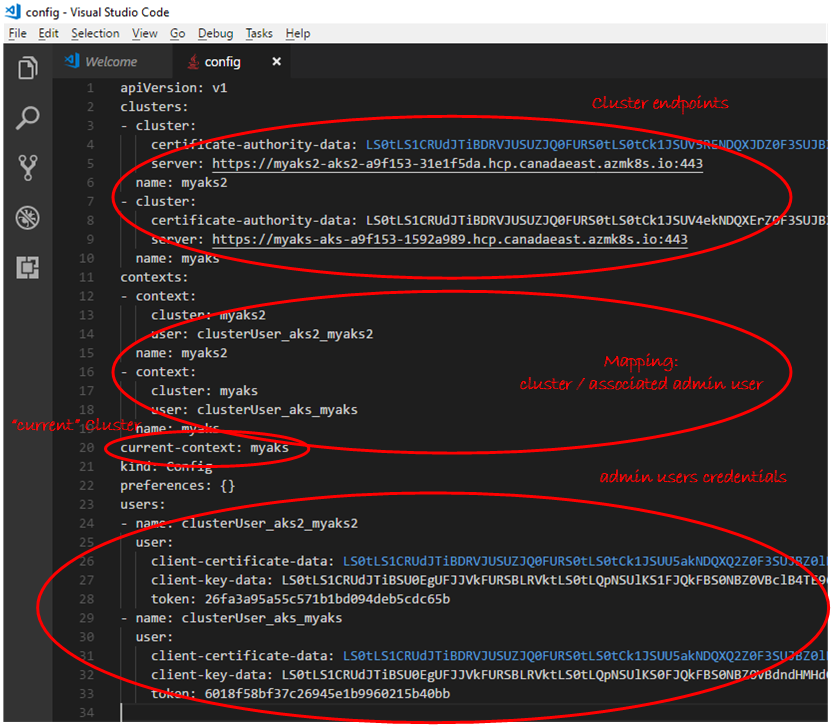 Let’s assume we deploy some containers on a replica set without creating Azure resources.  This step illustrate the typical interaction with Kubernetes cluster.  It could be a simple read operations (e.g. kubectl get pods).

We see kubectl commands use credentials gathered in previous step.

Let’s assume we do another deployment with kubectl create.  This time, one of the underlying pod will provision an Azure disk.

This shows how Kubernetes integrates back to Azure.

We unveiled the magic behind the scenes.

That path is the quickest to get value out of Azure AKS but in production scenarios, we might want more control.

For instance, we might want to create the Azure AD Service Principal beforehand.  The procedure to do that is well explained in online documentation.

We did drill down in the different identities involved in different AKS scenarios.

That knowledge isn’t required to start using AKS.  It does become useful when considering operationalizing the service though.