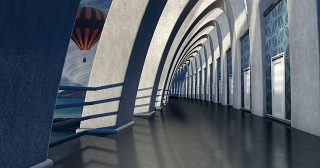 Azure DevOps is formerly known as Visual Studio Team Service (VSTS). As I mentioned recently, VSTS had nothing to do with Visual Studio and we’re very happy with the new brand name.

With CI / CD, as with automation in general, I want the least code possible for maximum impact.

Something was missing in my tool belt. I needed to carry information from a task to another. I needed to get the output of a task and use it as the input of other tasks.

I struggled for a while before two of my colleagues (Mathieu Benoit & Kevin Kraus) showed me how to do that.

It’s a simple trick but one that isn’t documented prominently, so I wanted to share that with you here.

Let’s give an example where that technique was needed. That was actually the scenario that triggered our search for an output variable technique.

We wanted to manage the version of a micro service with Semantic Versioning, i.e. MAJOR.MINOR.PATCH.

For us, the MAJOR & MINOR belong to the code as it relates to compatibility and feature set. The PATCH part didn’t and it would be error prone to expect programmers to update a patch number in the code base each time they deploy something. We were keen to use the build number of Azure Dev Ops. That number increments each time there is a build.

We also wanted the full version (i.e. MAJOR.MINOR.PATCH) to be injected in the code so it could be returned as a service version. This way we have an easy way to identify which version of a service we are talking to.

This is a schematized version of our build pipeline: 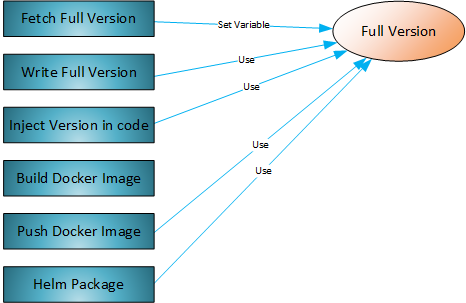 It’s easy to see that without an output variable, this pipeline would be very tedious.

The solution is pretty straightforward. It doesn’t require calling an API or an SDK, just to output something on the console:

Azure DevOps will automatically pick it up. So we can do that from Python, PowerShell, Bash shell, anything that can output to the console.

For instance, our Python line was:

The variable we defined here is then instantiated as a variable in Azure DevOps and can be used by subsequent tasks in the same pipeline.

Here we used it in a build. The same thing can be done in a release pipeline.

Something simple that I found extremely useful in some pipeline.

It allows us to couple loosely tasks together. The alternative is having tasks do more while they hold the state of what should be a variable.