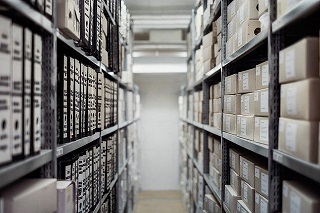 Around the turn of the year, I moved my blog to GitHub pages. GitHub pages does only the static content serving part. I surrounded it with different Azure services to have a complete blogging solution.

One of those services is Azure Application Insights for web analytics.

App Insights keeps the data for 93 days. Although it is plenty to troubleshoot problems, I am after the Data Lake scenario: keep all the data and one day you might find a way to exploit it better than when you collected it.

To a lesser extent, I would like to do the same thing with Azure Log Analytics, which I’m also using.

I have been looking for a way to archive that data. As it is exposed by REST API, I was first planning to write some scheduled Azure Function to pump the data out and persist it in Azure Data Lake storage in the form of Parquet files. Kusto / ADX could then have ingested those parquet files as external tables. That approach would have worked but was laborious.

I since found a much simpler way. ADX integrates with Azure Monitor via what is called ADX proxy. It makes it easy to load data from Azure Monitor into an ADX cluster. When the cluster is turned off, we only pay for the data stored in Standard Azure Storage. I could export it to blobs one day if I need to analyse the data outside of Kusto.

Archiving the data periodically (more often than every 93 days), I’ll be able to get a hold of all the telemetry data since I move the blog to GitHub pages.

In this article, I’ll show how to do a periodic import in a robust manner, not reading data twice and taking care of failure scenarios. This will allow us to explore a couple of Kusto concepts and techniques.

In a future article, I’ll show how to automate the process.

There really is just one requirement, i.e. tracking where we are at. But if we think this through a little more, that requirement declines into two:

For the first requirement, we first think of Kusto Database Cursor. They allow us to query data “since last time”.

Unfortunately, cursors are not implemented in ADX proxy.

We though about looking at timestamp in Azure Monitor tables, but this would be a little dangerous. Data come to Azure Monitor in an asynchronous way and it isn’t impossible that earlier data comes later. Using the timestamp, we would expose ourselves to missing data sometimes.

We opted for the ingestion_time operator. It returns, for every row, the time at which the data was ingested. It depends on the Ingestion Policy being active on table. It is for Azure Monitor.

We will use that time track where we left off.

For the second requirement, we have to think about it as Kusto is an append-only (or mostly) database. It doesn’t implement transaction nor rollback.

Data can be deleted in Kusto. The primary ways are:

We are going to use the last mechanism.

Kusto stores its data in shards, or extents. Those are read only. In order to “delete” a record in an extent, we need to recreate the entire extent (this is what a data purge does selectively). But we can drop extents altogether with the .drop extents command.

The only problem with this approach is that although extents are read only, they can get merged. Having a lot of tiny extents isn’t efficient so Kusto merges small extents into bigger ones in the background. This is governed by the Merge Policy.

This means that the data from a failed archiving process could get merged with the data from past successful process. This appends in the background and it would be a race to rollback before it happens.

In order to avoid that racing condition, we will disable the Merge Policy, at the database level, at the beginning of the archiving process and re-enable it after.

Here is the complete process: 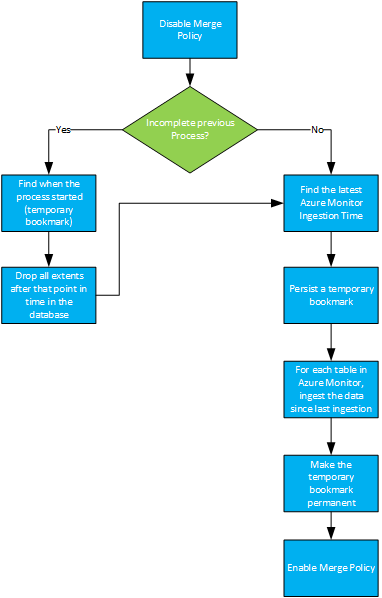 In this section, we’ll go through the scripts to setup the database. We recommend using a separate database for this. We are going to use Azure Application Insights in the scripts, but if we would like to do both App Insights & Log Analytics, we would recommend doing that on two different target databases, since we use database-wide Merge Policy and extents-rollback.

The complete script is available on GitHub.

We first need to connect to the Azure Monitor cluster (in this case Azure Application Insights). The online documentation describes that process well so we won’t repeat it here. We will need the URL.

We will give the table names in the script, but just to show “how we did it”, we simply did, within the App Insights database (through ADX proxy):

Now, let’s go to our Kusto database and create those two stored functions:

This is the Kusto way of storing a constant. This allows no to pollute the entire script with hard coded URLs.

And now, another function:

We are going to use this in the bookmark logic.

recordCount is used to leave a trace of how many records we ingested at one moment. Also, it is a flag is to differentiate from a permanent bookmark and a temporary one: when it is null, it is a temporary bookmark, while when it has a value, it is a permanent one.

monitorMaxIngestionTime tracks where we are in Azure Monitor while startIngestionTime remembers when we started ingesting data in Kusto so we can rollback.

Finally, let’s create the tables mirroring the ones in Application Insights:

Let’s ingest data from Application Insights. We’ll do it manually here but as mentioned in the introduction, we’ll automate it in a future article. The full script is available on GitHub.

We’ll simply follow the activities in the diagram we showed above.

This one is quite simple:

(There are two ways to merge extents, we disable both)

Here we simply call upon a function we defined earlier:

We use store functions a lot as it makes things easier with automation where we don’t want to store detailed logic in the orchestrator.

In the happy path we should have a null value returned from that function which means we do not have any failed previous attempt to recover from.

If we would execute the print incompleteStartIngestionTime() query again, we would get a value. This is because we haven’t completed the ingestion.

For each table in Azure Monitor, ingest the data since last ingestion

Here we’ll show the logic only for pageViews, but we need to do that for each table:

We basically append the content of Azure Monitor table between two values of ingestion time: the previous watermark and the new one.

The reason we bracket “until” latestIngestionTime is in the unlikely case that data gets ingested in Azure Monitor while we copy it. The last table would have all the data, while we wouldn’t have caught the data in the first table. To avoid that, we fix the latest ingested time at the beginning and leave the rest for next time.

We test for NULL to cover the case where the Bookmark table is empty, i.e. the first time we run the process.

Here we compute the number of records we ingested.

This returns a value we are going to use in the next step.

Here we need to “update” the bookmark to flag it as permanent. Although Kusto doesn’t allow updates, it’s easy to simulate one on a small table by replacing its content in one operation:

To better understand what happened here:

This will apply the default Merge Policy to the database.

Now the script to recover from a failure (available on GitHub). Here we are in the scenario where

Does return a datetime.

We will roll back everything done after this time:

Because of the way we create the bookmark, i.e. picking the now time before insert it in the Bookmark table, it means the Bookmark extent will have a MinCreatedOn value slightly higher than incompleteStartIngestionTime(). It will therefore be deleted in the rollback, leaving the Database in the previous state before the failed process started.

We built a robust archiving mechanism from Azure Monitor to Kusto.

On the way we learned of a couple of concepts such as:

We used all those concepts to simulate transaction in an append-only database.