My ultimate ingestion process for historical data at scale with Kusto 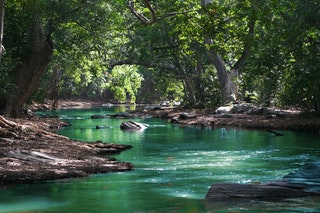 In this article, I want to be more prescriptive and share an approach that works well for me.

Is that the ultimate process? Of course not, that is clickbait. As we discussed at length in the previous article, different scenario will call for different choices. But it’s a process that worked great for me in a many contexts though and it should make all this architecture discussion from the previous article more concrete.

It also contains a lot of personal choices. For instance, I find using external table more intuitive than ingesting blobs directly. Logic App, one of my favorite Azure services, also make an appearance.

The scenario I was working with:

Here is the approach: 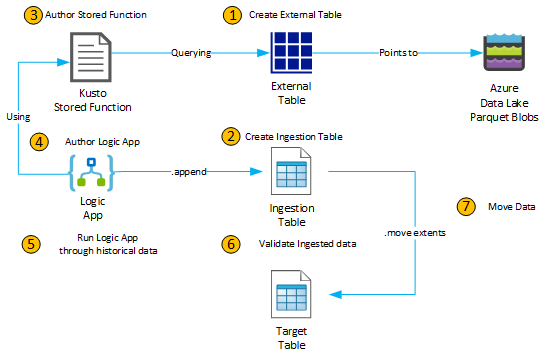 For the remainder of this article, we’ll discuss and justify each step.

We are going to base the ingestion on an external table pointing to blobs in the Azure Data Lake as opposed to ingesting from those blobs directly.

As discussed in the previous article, this has the following advantages:

We also find it is more intuitive to deal with an external table than a stack of blobs.

As for the transformation, we only had minimal needs. As mentioned, we simply renamed a column.

This is optional although quite convenient.

Instead of ingesting the historical data in the same table where we ingest data in real time, we separate it during the ingestion.

This buys us the flexibility of being much easier to delete the historical data and start over again.

If we ingest in the same table, we could run into historical extents being merged with “real time” extents, which would make it much more complicated to delete historical data. Also, if by mistake we would re-ingest the data ingested in real time, it would be hard to clean it up.

As with many database technologies, we find it easier to manage data logic when it is closer to the data. Hence, we use Kusto stored function here.

The function’s logic is returning the “next slice” of data. It looks at where the ingestion table is and fetches a slice after that.

The advantage of this approach is that if an ingestion fails, the query will automatically start over since the ingestion table won’t have changed.

Nothing fancy: it is basically a while loop with an ingestion command in the body.

In most cases we’ll need to readjust the default of Logic App until-action which is 60 iterations over 60 minutes. Most large-scale ingestion are longer than that.

We run the Logic App to completion.

We validate a few things:

Finally we can proceed to a migration of the data from the ingestion table to the target table using .move extents.

This ingestion method isn’t the only one possible, but it works rather well.

For simpler scenarios we could skip a few steps. For instance, we could use the LightIngest tool if we didn’t need to cut ingestion at an arbitrary time.

I hope this gave a good idea of the different moving parts and what value they bring to the equation.